View item in the U of T Libraries catalogue


Let’s Go Code! Activity Set is a game that supports the introduction of coding principles in the classroom without screens or technical knowledge. It’s a game appropriate for ages 5+ that gets young learners up on their feet, physically moving through coding puzzles as they build and navigate mazes with their peers.

The Let’s Go Code! Activity Set consists of 20 colourful foam mat tiles that are laid on the ground to create “mazes” for students to navigate. These tiles map a route from a starting-point arrow to an end-point robot. To navigate the route to the robot, students can only move from one tile to the next by following a sequence of coded actions laid out in additional coding cards. There are 20 reversible coding cards included in the set, each indicating an action like “move forward” or “turn to the left”. Students must devise a sequence of these coding cards that will move them from the start of the maze to the finish.

This game uses kinesthetic learning to introduce learners to coding and programming ideas. As the Let’s Go Code! activity guide notes, “the real building blocks of coding are found in critical thinking, sorting information, mapping routes between endpoints, and in helping children break down large problems into smaller mini-puzzles that they can think through logically.”

The puzzles possible through this activity are endless, and they can be customized with the addition of special objects and special action tiles that can be incorporated into the maze, requiring additional problem solving. For instance, blocked tiles with a big “X” on the surface are impassable, unless students include the special action “Jet Pack” tile in their coding sequence to fly above it! Many ideas for maze layouts and related games are included in the Let’s Go Code! activity guide.

Let’s Go Code! is a chance for creative and kinesthetic learning in Kindergarten and early grade classrooms. It can be used just as effectively during periods of free play as during scheduled activities, existing as one station among many exploring coding and programming themes. For more introductory coding activity ideas, check out some of the OISE Library’s other resources, including Coding as a Playground: Programming and Computational Thinking in the Early Childhood Classroom and How to Think Like a Coder Without Even Trying 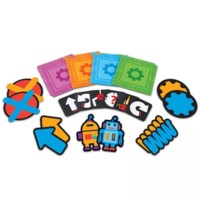